Join us to celebrate the 20th Anniversary of the groundbreaking book Dying Well and to honor Dr. Ira Byock, a thought leader and pioneer of the hospice and palliative care movement. 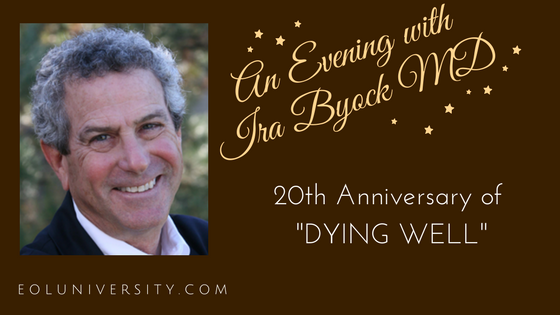 Monday August 21, 2017
6 pm Pacific/9 pm Eastern
Register here for this free online event!
In this online event we will talk with Dr. Ira Byock about his groundbreaking book Dying Well: The Prospect for Growth at the End of Life, which he wrote 20 years ago. On this special anniversary of the book, we will discuss how things have changed over the past 20 years and what further changes are needed to improve care for everyone at the end of life.

Dr. Ira Byock, Fellow of the American Academy of Hospice and Palliative Medicine, is a leading palliative care physician, author, and public advocate for improving care through the end of life.

He is Founder and Chief Medical Officer for the Institute for Human Caring of Providence St. Joseph Health, a 50 hospital health system serving communities across 7 states. Dr. Byock advances efforts to measure, monitor and improve whole-person health care systemwide. He is a practicing physician and is based in Torrance, CA.

Dr. Byock is Active Professor Emeritus of Medicine and Community & Family Medicine at the Geisel School of Medicine at Dartmouth. He served as Director of Palliative Medicine at Dartmouth-Hitchcock Medical Center in Lebanon, New Hampshire from 2003 through July 2013.
Dr. Byock has been involved in hospice and palliative care since 1978, during his residency. At that time he helped found a hospice home care program for the indigent population served by the university hospital and county clinics of Fresno, California. He is a Past President (1997) of the American Academy of Hospice and Palliative Medicine. During the 1990s he was a co-founder and principal investigator for the Missoula Demonstration Project, a community-based organization in Montana dedicated to the research and transformation of end-of-life experience locally, as a demonstration of what is possible nationally. From 1996 through 2006, he served as Director for Promoting Excellence in End-of-Life Care, a national grant program of the Robert Wood Johnson Foundation.

Byock’s first book, Dying Well, (1997) has become a standard in the field of hospice and palliative care. The Four Things That Matter Most, (2004) is used as a counseling tool widely by palliative care and hospice programs, as well as within pastoral care. His most recent book, The Best Care Possible (March 2012) tackles the crisis that surrounds serious illness and dying in America and his quest to transform care through the end of life. It has been praised by the Wall Street Journal, the Economist and other major publications, and won the Annual Books for a Better Life Award in the category of Wellness.
Here's the 20th Anniversary publicity blurb for Dying Well:
"In 1997, too many Americans were dying in hospitals, often in pain, often alone. Progress has been made in alleviating pain and expanding hospice and palliative care for people nearing the end of their lives. Yet, even today, too many people are dying badly! The stories in Dying Well enable readers to imagine that wellbeing is possible through these most difficult times of life. This book remains as vital and valuable to individuals and their families today as it did when it was first published."
Register here for this event and receive the Readers' Discussion Guide for Dying Well as a bonus!
Get Dying Well on Amazon.com
Website: www.irabyock.org

Categories: Care of the Dying